Having recently reached the milestone of 1400 species (it now stands at 1404), I thought I would do a little statistical analysis of my recorded data. I have been recording the local wildlife since 2003, and this graph shows the cumulative number of species found each year since then: 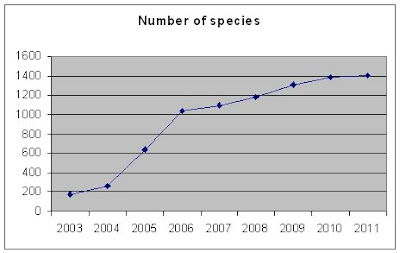 In 2003 and 2004 I only recorded plants, which explains the low starting point.

2006 was the first year that I started to record 'everything', so it's worth looking at the graph since then: 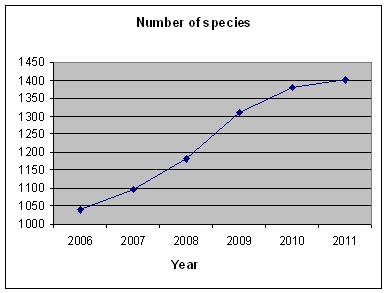 The curve shows a reasonable surge during 2008 and 2009, but each year since then has added fewer new species. It looks like the graph will level off somewhere around the 1450 mark, unless I add something new to the list of families that I record. Basically, it looks like I have found much of what can be seen - without trapping and by daytime - in my local area.

Whilst casting around for new directions, I came across a 1903 book on Ichneumons, and delved into its 380 pages with gusto. I was quickly able to identify one of my unnamed species from 2010 as Ophion luteus, which brought my total to 1402. I think I might have found my next area for expansion.

I also found a key to ants, and identified my local species of Wood Ant as Formica fusca:

And a check of the outdoor lights provided species #1404, the wonderful Brown China Mark micromoth:

The China Mark moths are very unusual, since their larvae are completely aquatic, feeding on plants in ponds and slow moving water.
Posted by Stuart at 17:25

The wood ant looks nice and juicy and healthy.

Congratulations on the 1400+ species Stuart - and all in your local area.

I wonder if climate change (if it's happening) might bring some new species your way?

Emma: yes, I have to say that ants in general always seem strong and fit.

Rob: warming is becoming more obvious in a couple of ways:

In terms of insects, the most noticeable change is in the timings and numbers of generations we find in moths and butterflies. In southern areas, moths have historically made more generations per year, with a longer overall season, but northern areas have had fewer and later generations. Now we're seeing a trend towards earlier and more numerous generations in northern areas.

In terms of plants, it tends to be seen in earlier flowerings than we we saw previously.

I'm sure that at least one of my sightings is due to warming: the leaf-mining fly Cerodontha silvatica was first identified in mainland Europe in 1957 and was recorded in England in 2003. I found it locally in 2005, so the overwhelming evidence is that the fly is moving north and west.

That China Mark is beautiful - and particularly interesting for me because we saw some last week at the edge of our local lake/large pond - a much more worn specimen than your and with a bit of wing missing. (It was id'd for me by the chap I was with, on a damselfly trip.) I had no idea before that the larvae of any moths were aquatic.

Gill: The larvae live on aquatic plants such as water lilies, and can spend extended periods underwater. I found a few pics here:

Most of the documentation on these larvae exists on gardening websites, where the focus is on killing these 'insignificant brown pests'. Beauty is clearly in the eye of the beholder.

Hi Stuart,well done on your species listing ,you might like to look at this link and represent Ireland !http://markgtelfer.co.uk/listing/

Thanks for the tip.