On 14th September 2014, I posted about a Stigmella perpygmaeella leaf mine on Hawthorn with a hymenopteran parasite in the mine. I couldn't get any further with the identification at the time, so left the wasp identification abstract.

I have now got a little further with the wasp identification, so here's a little update, with an updated version of the image.

The original micromoth larva is shown at point A, and is quite clearly chewed and dead. At point B we have the 'visitor', which has a distinctive dark gut. I have now discovered that the intruder is a Eulophid wasp, which is an ectoparasitoid of the micromoth larva.

So the sequence of events is as follows:


I wonder if the wasp larva makes its little journey back down the mine in order to avoid being detected by a potential hyperparasitoid.

Out of the blue

In 2004 I photographed a 'caterpillar' that closely resembled the male flowers of Pine, and I assumed that the larva was gaining some protection from mimicry, since the area was covered in fallen flowers. The original page is here, half way down.
I was subsequently informed that the caterpillar had been parasitised, and that it hadn't originally been that colour, so I binned the assumption about mimicry and moved on with my life.

I have made a composite image of the original images for comparison:


This morning I was amazed to find a virtually identical image where the parasitoid was identified as an Aleiodes (Braconid) wasp.

The Aleiodes lays an egg in the live moth larva and wraps the parasitised larva in a protective shell which results in the mummified appearance shown above. The Aleiodes larva feeds internally on the mummified caterpillar and pupates internally before emerging as an adult. The lifecycle of these Braconids is fascinating and complex, with some species managing to become bivoltine by parasitising different (and often unrelated) univoltine moth species which have mature larvae at different times of the year.

I suppose the Aleiodes might still gain some protection from mimicry, since there will almost certainly be hyperparasitoid wasps that target the mummies.

So. Still much research to be done, but it's nice to get even a Genus id after 13 years.

The last year or so has been spent mostly poring over microscopes and identifying obscure specimens from different parts of Ireland. I also started the Irish Leafmine recording system in conjunction with the National Biodiversty Data Centre, and that initiative has seen a new batch of mine-recorders submitting records for the first time. Here's a shot of the coverage in the first year: 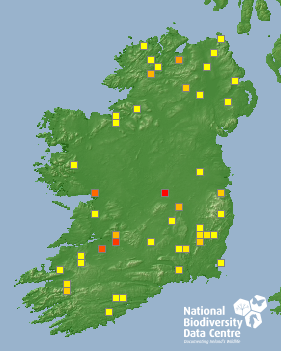 I have also been working on an Irish checklist of plant galls in an effort to increase awareness and recording of plant galls in Ireland. Hopefully this new scheme will get under way in 2017. This list currently stands at 1277 species (there are many more types of organism that cause galls than those that mine leaves!).

Now that I have more or less retired from my computing career, I have devoted more time to my book, which documents the more interesting finds over the last 14 years since I started taking photographs and writing my blogs. I think 2017 might be the year that I try to find a publisher.

The day was organised by Butterfly Conservation (NI) and moth traps had been set the previous night. I went along to lend a hand and see what I could find.

We had hoped to see Purple Hairstreak, which is associated with old Oak woodland, and it is known to favour tree tops when the temperature has risen in sunlight. The day was rather overcast, with a few rain showers, but the sun did break out at one point. We were observing the tops of Oaks at the time and we did see a couple of blue-tinted fliers at the very top of high trees during the brief sunny period. They might have been Purple Hairstreak, but even those with binoculars couldn't give a firm id. We scouted around and found a few vantage points high in the valley which gave good close views of Oak summits, but at that time the sun had gone. Maybe next time.

I did, however, find a few interesting mines that were new to me.


Then I noticed mines on smaller leaves of Oak which reminded me strongly of the very common Orchestes fagi miner found on Beech. Turns out it's the very closely-related beetle Orchestes quercus:

The point marked 'A' is the oviposition scar on the underside of the midrib.

The final new mine for me was Phyllonorycter coryli on Hazel:

This is quite an atypical mine for a Phyllonorycter: most of the others make a tentiform mine made by creasing the underside of the mine to tighten and shrink it, which buckles the top surface of the mine. An example is shown here.

En route I found plenty of specimens of Sulphur Tuft, so I guess the fungal season is about to kick off:

There are many variations on the theme: sometimes the host larva is kept alive and it can move away after the wasp larva has emerged. This is thought to be a distraction strategy where the host larva acts as a decoy, attracting secondary parasitoids that would normally target the primary parasitoids using the host as a vector.

I recently found specimens of the aphid Eucallipterus tiliae on lime and spotted this odd structure under one specimen. 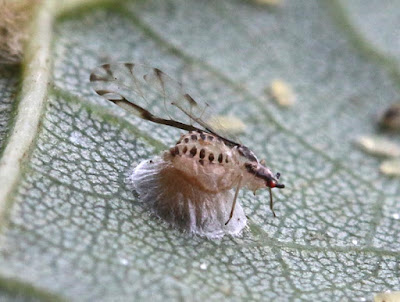 This aphid has been parasitised by the Braconid wasp Praon flavinode which targets mid-instar aphids. The aphid is glued in place, although it can still feed (the specimen above is now an adult) and grow. The braconid feeds inside the aphid and then drops into the 'podium' where it pupates.

So in addition to using the aphid as a food source, it's also using it as shelter for pupation.

To give some sense of scale, the 'podium' is about 2 mm. diameter at the base.

Here's a shot of some of the earlier instar aphids on a leaf:


No matter how much I find out about these wasps, I am constantly surprised by their range of habits and techniques.

Both species are new to my Species list, and Praon flavinode is a first Irish record.

It has recently been discovered that Ireland has two species of Wood White butterfly: Leptidea sinapis, which is restricted to the Burren and nearby areas (and is the same species as that found in Great Britain) and the Cryptic Wood White - Leptidea juvernica - which is found in the rest of Ireland, including Northern Ireland, but is absent from GB.

Resolution of the conflicting and confusing identifications and distributions was temporarily further confused by the suggestion that one of the species was Leptidea reali, which is found in France. It seems that the situation has now been satisfactorily resolved, and it now remains to examine local populations to be sure we have the correct distributions. There is no sure way of separating the species by morphological characters, although differences have been proposed, so the only way to be sure is to sample populations and examine the genitalia.

The purpose of yesterday's visit to Craigavon was to train recorders in the identification of Cryptic Wood White (CWW) and to demonstrate a recording system for subsequent use in tracking this (and other) species.

But me being me, I didn't restrict myself to CWW, and I recorded more or less everything else we encountered.

First, though, a shot of the courtship behaviour of CWW:

The male (left) usually sits higher and repeatedly swipes his antennae and proboscis over the face of the female. This courtship can take up to 30 minutes to complete. If the female accepts him, mating takes place. We saw one recently-emerged female being courted by two successive males before her wings had even fully inflated.

Gorse bushes were very fruitful, and were covered with Gorse Shieldbug:
And their eggs:


I also found many specimens of the minute (3 mm.) Gorse Weevil, Exapion ulicis:

There were a great many Common Blue damselflies:  And a few Blue-tailed damsels:


I found a few galls of the mite Eriophyes pyri quite early on in the walk:


This appears to be the first record for NI, with one previous record from Ireland, and new to my Species List.

A record shot of the Mirid bug Harpocera thoracica. The male antennae have an interesting 'structure'.
New to my Species List.

The day-flying Mother Shipton moth caught my eye, and it posed conveniently for a few shots:

I have seen the Lacehopper Tachycixius pilosus quite a few times, but this one seems to have a mite of some kind under the left wing. Mites usually position themselves in places where they can't be scratched off.


Finally, a Tetragnatha sp. 'Stretch Spider'. There are a couple of these that can't be separated without a microscope:

This bioblitz was based around Benburb castle, but also included the grounds of what is now known as Benburb Priory. The 17th century castle is being restored and the priory was formerly a manor house built in the 1880's.

The underlying geology is limestone and the site slopes downwards towards a river which is extensively engineered with cuts and sluices, and could almost be regarded as a canal. The riverside area has been allowed to run wild and is covered with Giant Hogweed, Bamboo, Japanese knotweed, Laurel and Himalayan Balsam. The grounds closer to the Priory are maintained as a decorative garden, but again, large areas are running wild, with a collapsed victorian greenhouse/orangery attached to outbuildings. This feature runs for some 50 metres and was clearly an important structure in its day. This is a shot of the old glasshouse:

The south-facing glasshouse area contained a mixture of wild and cultivated plants, notably an overgrown herb garden, and attracted a huge number of hoverflies, butterflies, solitary bees and bumblebees.

Here's a shot of a Holly Blue on the approach path:

We made a quick survey to see where we should concentrate our efforts and it was clear that the riverside paths would be most productive. When I noticed that the area was limestone, we looked for Garlic Mustard, since this is a host plant for the Orange Tip butterfly and we immediately found an occupied flower:

We saw many Orange Tips, both male and female along the river bank. This female was nectaring on Herb Robert:
The same area yielded 14-spot Ladybird:


And I caught a glimpse of a huge pond skater down below in the cut next to the river. It's a poor shot, but there is only one pond skater this size. It's Aquarius najas, and is around 5 cm long from front foot to rear foot:

We found a couple of leaf miners in the wooded area closer to the castle:

Closer to the castle, I found a moth larva grazing on lichen on a fence post. It's Brussels Lace, Cleorodes lichenaria:

That's a good example of the formal name clearly stating the nature of a species.

A final shot of Lords-and-Ladies or Cuckoo Pint, which I only ever find on lime:

Overall we submitted perhaps a hundred species on the day. This is far fewer than I would normally expect on a day's hunting, especially on a bright sunny day, but the habitat is essentially 'cultivated but abandoned', so the biodiversity could be expected to be low.
Posted by Stuart at 09:17 4 comments: