Another new moth: Beautiful Carpet - Mesoleuca albicillata. This is 'widespread, but not numerous'. Wingspan about 20mm. 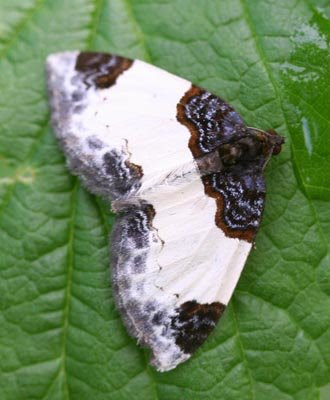 After a brilliant start to June, it has been very wet for the last two weeks. Today we got a bit of sunshine and I saw this tattered Speckled Wood basking in the sunlight: 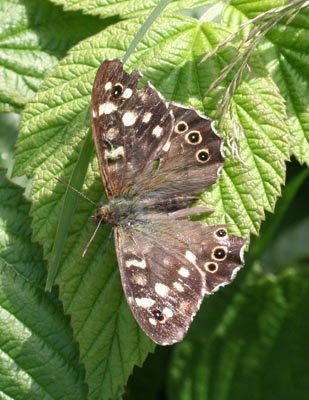 Suddenly it was dive-bombed by another that chased it off and then occupied the same basking spot. This one is in better condition, but I think it's a little early for second generation specimens. 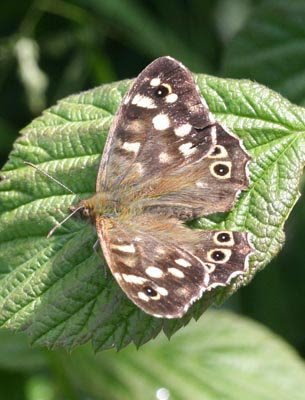 I think that the best colour on our hedgerows is provided by the flower-buds of Greater Birds-foot Trefoil: 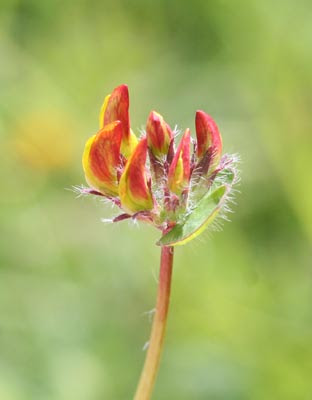 The red more-or-less dissappears when the flowers are mature. This flowerhead was juxtaposed with what looks like Melanoleuca melaleuca: 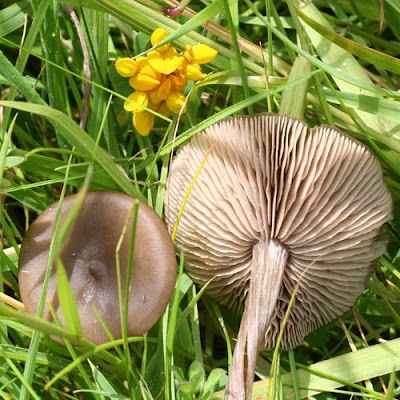 To finish off: The Meadowsweet leaf-miner - Agromyza filipendulae. It has had to backtrack when it inadvertently bumped into its old track. (The mine starts in the purple centre portion, then goes clockwise until it gets trapped above the purple portion, when it resumes its clockwise track onto a new portion of leaf. Exit hole is bottom left.) 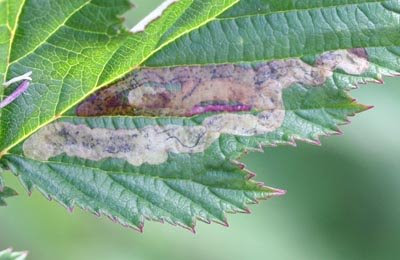 One of the problems that fungi have overcome in many creative ways is that of spore dispersal: in order to create spores in great numbers, a large surface area is required. 'Conventional' fungi use gills or pores to create as much spore-producing area as possible, but other fungi use a number of alternative techniques to maximise the area and exposure of their spores, and these images show that off to great effect.

Triphragmium ulmariae is a common rust on Meadowsweet, and can be instantly recognised by the conspicuous bright orange aecia on the leaf veins and petioles: 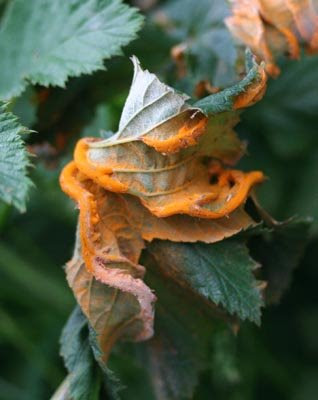 Notice the distortion of the leaf, which causes it to curl (larger surface area) and invert the leaf (better dispersal).

And now the classic piece of fungal manipulation: Entomophthora muscae. 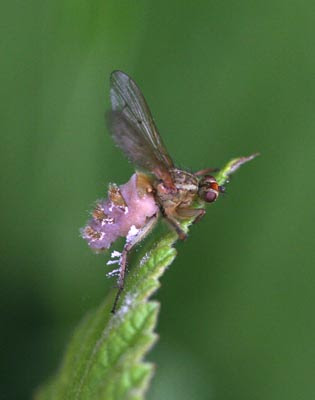 This fungus attacks female flies, entering via the alimentary canal and migrating to the abdomen. Here it multiplies rapidly, forming a large pink mass, whilst at the same time compelling the fly to move to the highest local point. This can be a blade of grass, a flowerhead or a leaf. Once in position, the female extends her wings and her rear legs, then she dies in situ. This behavior extends the abdomen as far as possible, and removes the wings as potential blockages. Again, the fungus has maximised the opportunity for spore dispersal. 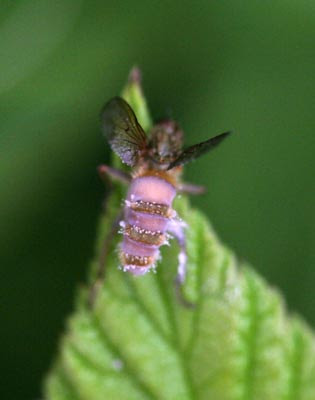 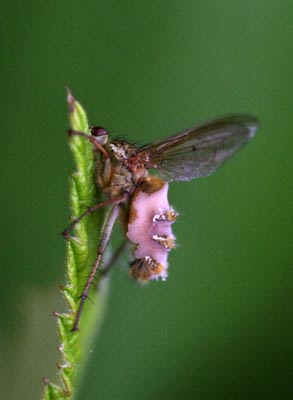 One of two confusion species, this is Platycheirus granditarsus. It is usually found neary marshy fields and ditches, which is exactly where I found this one. The main field identification character is the bright orange colouration of the abdomen, which is clearly visible in flight, but completely hidden when landed. 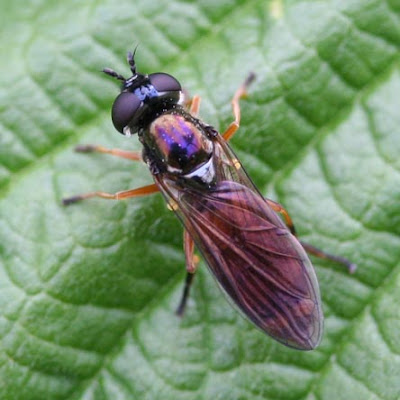 A major differentiator between this and Xylota segnis is the expanded front tarsi (feet). Unfortunately, none of the pics I have show this detail, although the dark patches to the rear of the orange band can just be made out through the wings.
Posted by Stuart at 08:43 No comments:

Most of the Cinquefoils are yellow: Tormentil, Creeping Cinquefoil, Silverweed are all yellow. Barren Strawberry is white, but Marsh Cinquefoil - Potentilla palustris - is the most wonderful red: 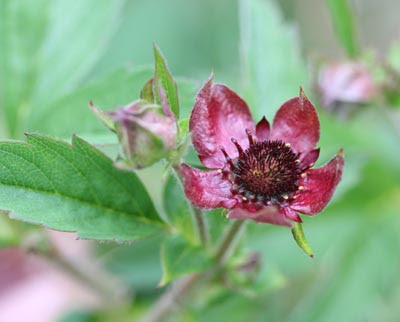 I only know this species from one very small area on my patch, although I have found it further afield. It grows at the edge of a boggy area, between the bog and a ditch, growing round the base of a few planted Alders.
Posted by Stuart at 08:22 No comments: 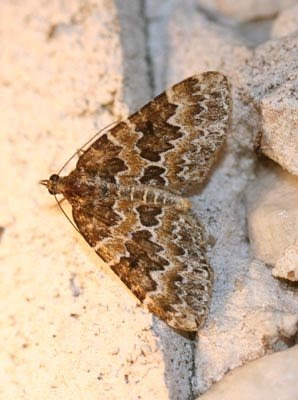 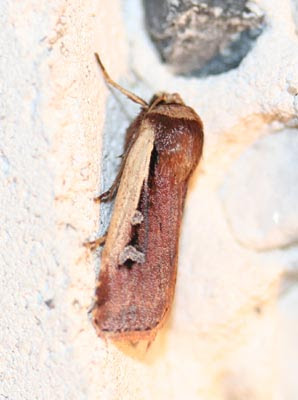 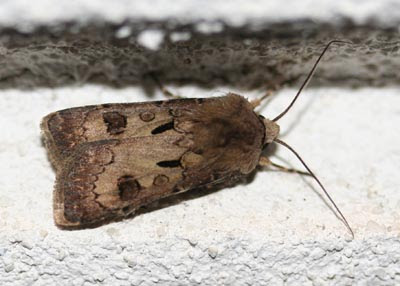 On May 30th, I showed a couple of images of what I supposed was the leaf-miner Cheilosia semifasciata. This identification has now been confirmed by a leading European authority on leaf miners (his website is: www.bladmineerders.nl). It turns out that this is an extremely rare species that needs a very specific habitat: Navelwort (or close ally) in deep shade. But even when suitable environments are examined in detail, they are usually not found, so something else must be an influencing factor.

This species is so scarce and under-documented that I have decided to show all the details I have, in the hope that others might be able to record it, too.

Here is a shot of the location I found it in: 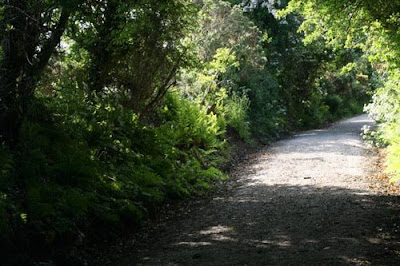 The bank on the left had Navelwort all the way along it, but the mining stopped abruptly at the line where the sunlight started.

Here's a (flash!) shot showing how obvious the miner is: 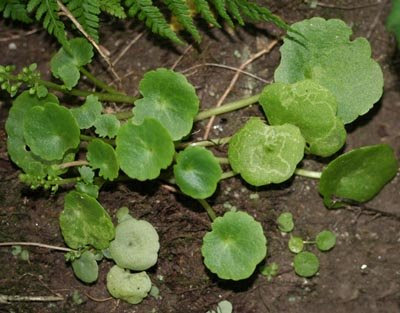 Have a look at your shaded Navelworts and see if you have any.
Posted by Stuart at 14:06 No comments:

It's always a good time of year when the orchids return. The first on my patch is usually the Northern Marsh Orchid - Dactylorhiza purpurea: 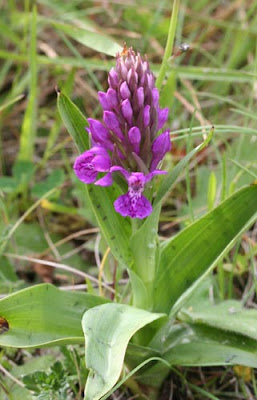 I did find a couple of Spotted Orchids in bud, but nothing worth showing yet.

Butterwort is also out. The pale yellow-green leaf rosettes always remind me of a sickly starfish. 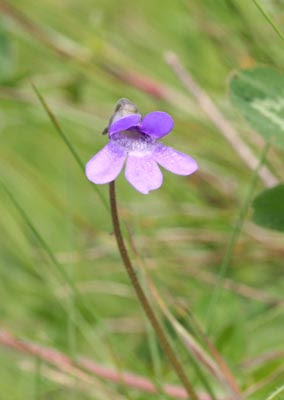 Fungi aren't usually associated with summer, but I often find new growth of Dryads Saddle - Polyporus squammosus - at this time of year. 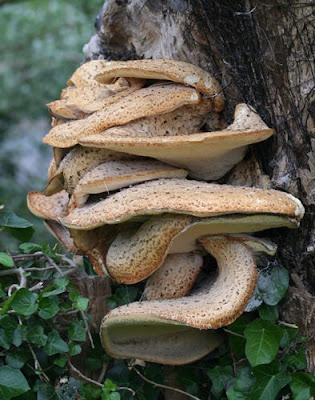 This batch was about 60 cm tall.

You can just make out the black 'bootlace' on the upper right of the image. This is caused by an infestation of Honey fungus, which probably killed the tree in the first place.
Posted by Stuart at 13:31 2 comments:

One part of the hedgerow is currently alive with damselflies all displaying themselves on ferns, Hawthorn and grass stems in a shimmering display of blue, red and green. I love a challenge, so I thought I would try to get 'the definitive image' of a Common Blue Damselfly.

Last night, I was browsing the images and I liked the quality of this one, and I was also pleased with the composition: the Scaly Male Fern makes a lovely platform. 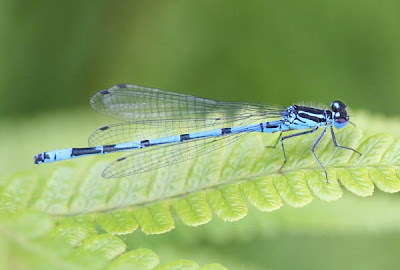 Suddenly my jaw dropped. The markings on the second abdominal segment are quite different from the usual 'wine-glass' marking of the Common Blue, taking the form of an underlined 'U'. A quick glance at the references revealed that this is a male Azure Damselfly - Coenagrion puella - another first for me.
Posted by Stuart at 09:08 5 comments: