I've recently seen a few 'whites' flying over hedgerows and fields, but this is the first time I've been able to get close enough for an identification. Green-veined White tends to inhabit slightly rougher areas than the Small White on my patch, with the GVW being seen in rural hedgerows, whilst the Small White is more frequently seen in gardens. The first one I saw was a freshly-emerged female: 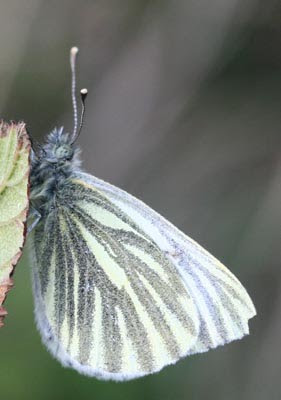 Then I almost immediately saw a male on a dandelion 'clock'. I suspect it had also just emerged, since the seedhead isn't a food source. 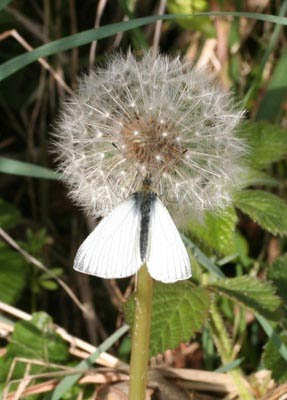 Whilst the main priority of a fresh specimen is to inflate its wings, this one was also checking out her tongue function: 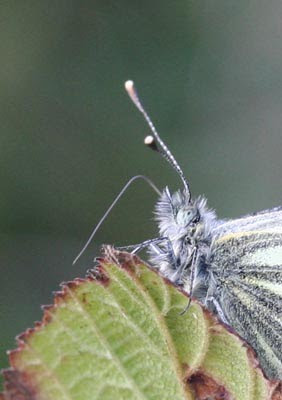 Although the veins on the underside of the wings appear to be green, a close-up shows that the scales are yellow and black: 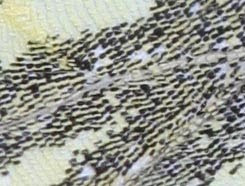 Wow! How d'you get a shot of the scale like that? Fantastic! My green-veined whites are also out and about. What is their foodplant - and how do you know M from F?

Scale shot is straight off the sensor. That's how close the macro lens can focus. DOF is, however, about 500 microns at that distance. Just as well it's flat.

GVW also eats Cardamine, but only the leaf. Other mustards are also eaten. I've seen both OT and GVW eggs on a single plant, but the GVW larvae are safe from the OT larva because the OT larvae stay on the seedpods.

Female of the spring generation has one or more spots on each upper wing, whilst the male has no spots (although both have wingtip flashes). The summer generation is much more strongly marked, but the female still has more pronounced spots. Both sexes also gain underwing spots in the summer generation.