Here's a close-up of the Bumblebee Bombus cryptarum: 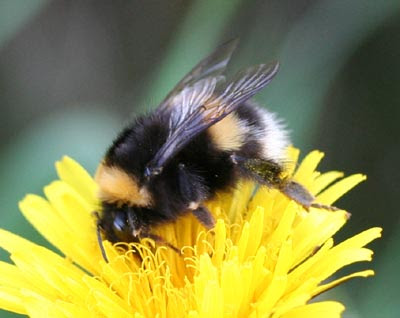 Bombus lucorum was recently split into 3 species: Bombus lucorum, Bombus cryptarum and Bombus magnus. Bombus cryptarum was added to the Irish list in 2006, and consistent sampling has shown that my local population contains this species. I recently posted about the Cuckoo Bumblebee Bombus bohemicus, which was known to be parasitic on B. lucorum sensu lato, but I don't know if it also parasitises B. cryptarum or if I also have B. lucorum s-s, which I rather suspect. Work to be done, here.

The best diagnostic feature of B. cryptarum is the black notch in the forward yellow band, just in front of the wing joint: 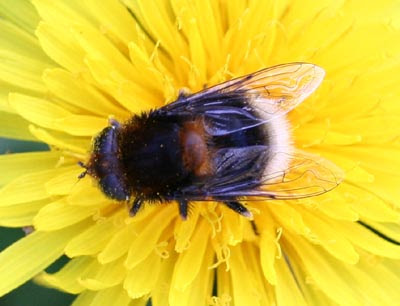 Note the distinctive Eristalis loop in the wing vein.

There are two main reasons for the mimicry. In the case of parasitic species like the Cuckoo Bumblebee, it may need to be able to get into the nest undetected, so it looks rather like the host. In the case of the hoverfly, it can either be to get into the nest undetected, or to fool predators into thinking that it is a Bumblebee, and can sting. Eristalis intricarius larvae live in the bottom of ditches, so they are applying the mimicry to avoid being eaten by birds.

Eristalis intricarius is known to be widespread, but in low numbers, and of the 50 or so specimens I have found over the past four years, they can all be pinned down to two separate patches of ditch, each no more than 10 metres long. So there is something that controls their distribution very tightly. To make things even more confusing, the two ditches (roughly 1.5 km apart) could hardly be less similar:

One runs North-South, the other East-West. One is at the edge of cattle pasture; the other, the fringe of a bog. One is fringed by Meadowsweet, the other Soft Rush. Just about the only thing in common is some Hawthorn and some Gorse and Bramble. Interesting......
Posted by Stuart at 08:45

"Bombus lucorum was recently split into 3 species:" Just as I thought I'd got the common bumble bees sussed - sigh! I can't see me picking up that notch in hte field! [Incidentally I saw one the other day that looked like B. lapidarius but with a yellow cummerbund - any ideas?]

"Just about the only thing in common is some Hawthorn and some Gorse and Bramble. Interesting......" Very; I'll keep my eyes open and let you know if I find any...

Maybe your lapidarius with a yellow cummerbund is a male:

"Maybe your lapidarius with a yellow cummerbund is a male:" Don't think so, the yellow band was on the 1st or 2nd abdomen segment, no yellow on thorax - more like the B. pratorum a bit further down the same page (yes, it is a good site) - I wonder how dark orange that can be? Said bee was smallish for a queen but not long-bodied like most males. Only saw it once, briefly.